After acknowledging the three or four behaviors that may impact on onset or progression of chronic disease (i.e., avoiding tobacco, limiting alcohol use, maintaining a healthy weight through appropriate dietary choices, regular physical activity), I struggle with making further recommendations about other behaviors to address. The Global Burden of Disease 2017 Risk Factor Collaborators helped me place risk factor modification into a broader context. Here are some of their results from a November 2018 Lancet publication about disability-adjusted life years (DALYs): 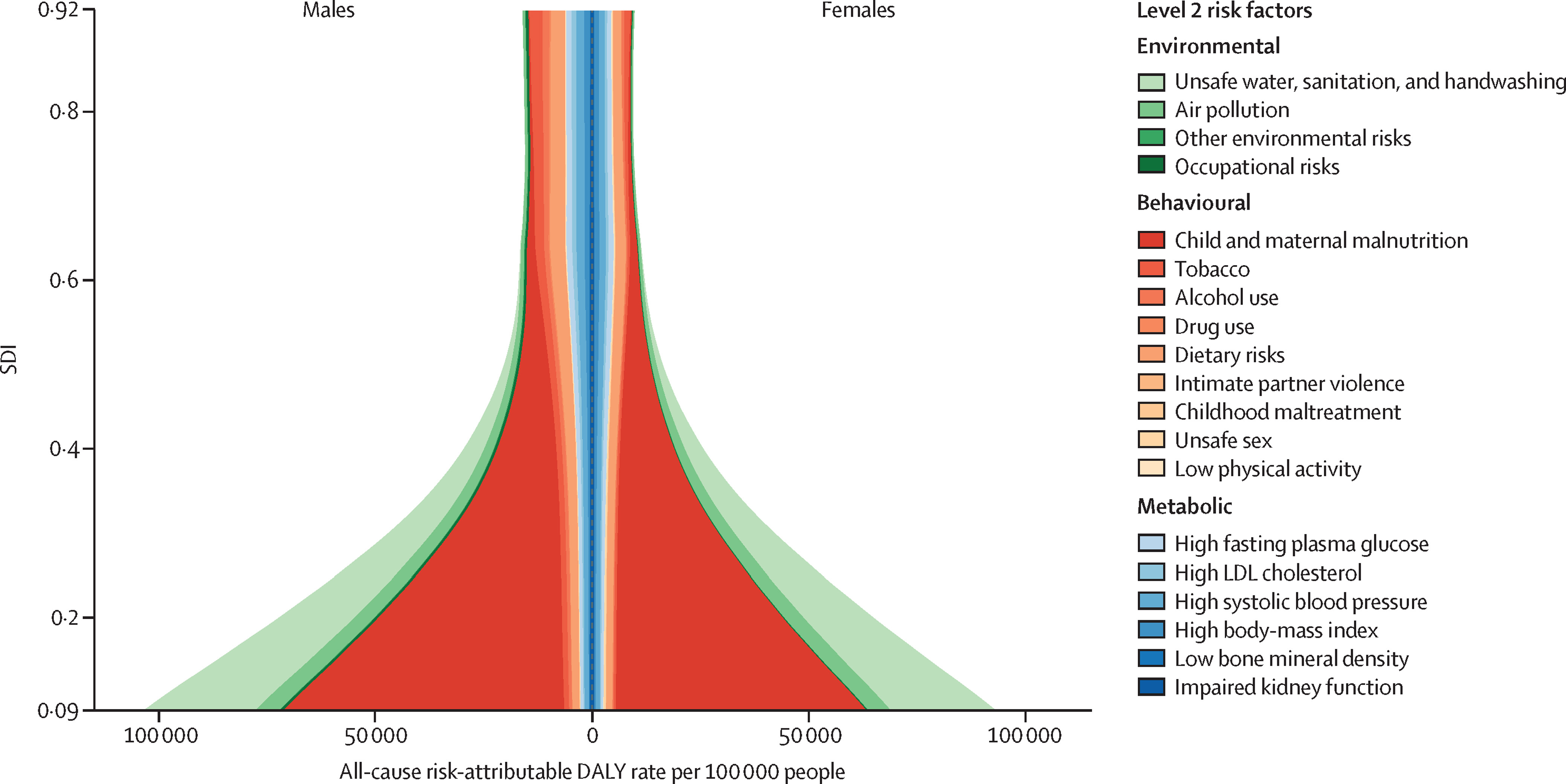 For those of us living in the United States, a screenshot of a table from the publication’s appendix may be more informative (you may have to zoom in using your browser settings or open the image in another tab, sorry): 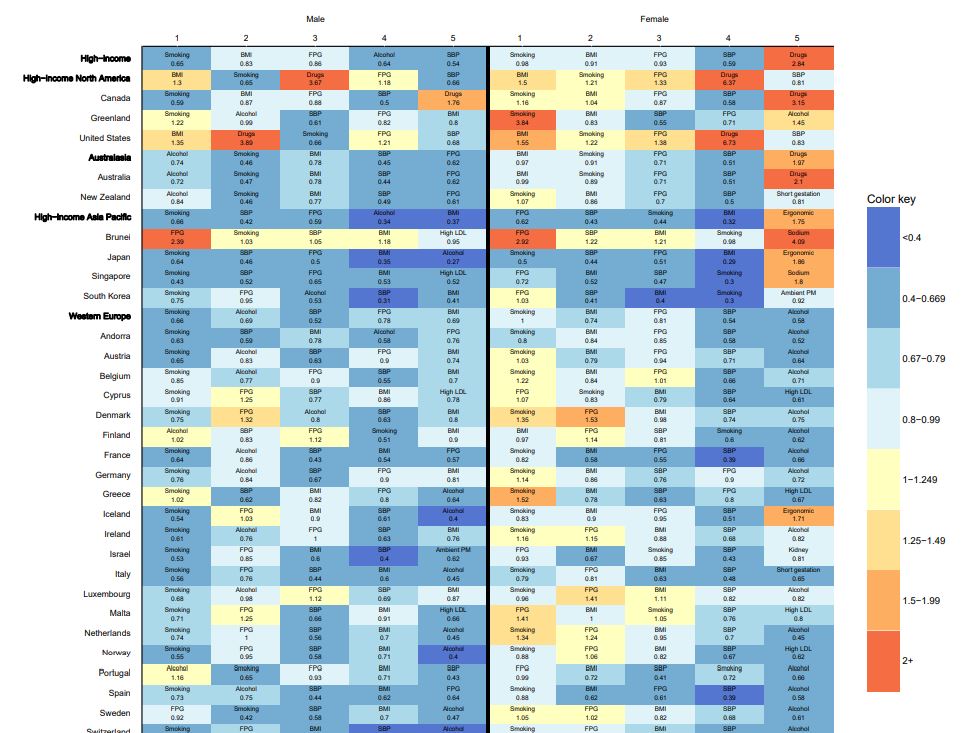 Shades of blue represent lower observed DALYs than expected based on SDI (sociodemographic index), whereas orange shows observed DALYs that exceed expected levels. Observed to expected ratios are based on age-standardised DALY rates. We in America (fifth row in the screenshot) lead the world in the observed-to-expected rate of DALYs due to drug use among men and women. The effect of DALYs in our country alone appears to be responsible for having drugs listed as the fifth leading risk factor affecting DALYs among women (the only orange cell in the top row).

Excluding high-body mass index, the metabolic risk factors suggest interventions targeting early identification and improving medication adherence to address those risk factors, standard expectations of our current healthcare system. But in a broader context, the high body-mass index, tobacco, dietary risks, drug use and alcohol suggest some element of addiction (to food,* to regulated and unregulated drugs) that we have failed to address.

*In a 2016 position paper commissioned by The National Center on Addiction and Substance Abuse about food addiction, Linda Richter and her colleagues summarized the evidence around food addiction and obesity. Their assessment was that not all overweight persons eat in ways that resemble an addictive or eating disorder, and not all people who score on a measure of food addiction are obese. Food addiction and substance addiction do share several features including: loss of control, continuing the behavior despite negative physical or psychological consequences, repeated failed attempts to cut down or stop the behavior, cravings, emotional dysregulation (difficulty with coping, negative moods and feelings) and impulsivity. Processed foods, with a high glycemic index and the right combination of sugar, fat and salt, like psychoactive substances:

In their 2018 publication Drugs, Brains, and Behavior: The Science of Addiction, the National Institute on Drug Abuse defines addiction as a chronic, relapsing disorder characterized by compulsive drug seeking and use despite adverse consequences. The Institute posits that the initial decision to take drugs is typically voluntary, but with continued use, a person’s ability to exert self-control can become seriously impaired. This impairment is the hallmark of addiction. The Institute has published recommendations to reduce the risk of substance abuse for early childhood (2016) as well as children and adolescents (2003). Some prevention principles for children and adolescents include:

The Institute admits that addiction cannot be cured, but it can be managed. For patients addicted to narcotics or illicit opioids, they recommend medications combined with behavioral therapy or counseling. There are pharmaceuticals for managing nicotine and alcohol withdrawal as well. Since we have no medications for patients addicted to stimulants or cannabis, the Institute recommends behavioral therapy for those individuals including cognitive-behavioral therapy, contingency management, and family therapy. Although the Institute is focused on drug abuse, I believe the principles may have some utility when thinking about increasing resilience against addiction in general.

The peer-reviewed literature around preventing addiction appears weak. High-intensity programs focused on family functioning encouraging authoritative parenting (strong interest in and care for the adolescent, often with rule setting [not to be confused with authoritarian parenting (“do as I say”)]) appear to be more effective than financial incentives to help prevent smoking initiation among youth. Family interventions may also be effective in reducing adolescent marijuana use, but not other illicit drugs.

Several interventions beyond medications have been tested to manage addiction. Personality-targeted interventions to high-risk youth, cognitive bias modification training and computer-based cognitive behavioral therapy may make a difference, but chronic care management (including longitudinal care with a primary care clinician, motivational enhancement therapy, relapse prevention counseling, on-site medical, addiction and psychiatric treatment, social work assistance, and referrals) and brief motivational interventions delivered in-person, by telephone or both in-person and telephone may not. For those of us interested in internet-based interventions, web-based cognitive behavioral therapy, text-based interventions, dozens of computerized interactive modules with prize-based motivational incentives, and a smartphone-based app with monitoring, information, communication and support services appear to help patients manage their addictions, but group-based manual-guided sessions on patient engagement with health information technology measures with facilitated communication with physicians did not.

Addictions in various forms have a large effect on the quantity and quality of life our fellow citizens experience. Despite a variety of published studies, there does not appear to be a holistic approach to managing addictions using a suite of online tools that includes prevention (possibly from a caregiver’s perspective), communication with addiction specialists, tools to maintain engagement initially and long-term, as well as coordination with healthcare team members who may prescribe medications to help manage withdrawal symptoms or cravings. Given the overlap of addiction with some mental health conditions and chronic pain, the proposed suite would also need to consider these dimensions. This work may not lead to a multi-million dollar valuation, but the platform could make a meaningful difference in the overall health of our population.