[From the article’s Abstract] “Clinicians and policy experts have raised concerns that the 30-day readmission measure used in this program [Hospital Readmissions Reduction Program] provides an incomplete picture of performance because it does not capture all hospital encounters that may occur after discharge. In contrast, the excess days in acute care (EDAC) measure, which currently is not used in the HRRP, captures the full spectrum of hospital encounters (emergency department, observation stay, inpatient readmission) and their associated lengths of stay within 30 days of discharge. [..] Overall, only moderate agreement was found on hospital performance rankings by using the readmission and EDAC measures (weighted κ statistic: heart failure, 0.45 [95% CI, 0.42 to 0.47]; acute myocardial infarction [AMI], 0.37 [CI, 0.35 to 0.40]; and pneumonia, 0.50 [CI, 0.47 to 0.52]). Under the HRRP, the penalty status of 769 (27.0%) of 2845 hospitals for heart failure, 581 (28.3%) of 2055 for AMI, and 724 (24.9%) of 2911 for pneumonia would change if the EDAC measure were used instead of the readmission measure to evaluate performance. Fewer small and rural hospitals would receive penalties. The Centers for Medicare & Medicaid Services should consider using the EDAC measure, which provides a more comprehensive picture of postdischarge hospital use, rather than the 30-day readmission measure to evaluate health care system performance under federal quality, reporting, and value-based programs.”

[Methods] “The EDAC measure captures the total number of days a patient spends in an ED, in observation status, or admitted as an unplanned readmission within 30 days of discharge after an index hospitalization. For each hospital, the EDAC measure describes the difference (“excess”) between the average number of days patients spend in acute care per 100 discharges and the expected number of days given the case mix of that hospital. Therefore, the EDAC value may be positive, negative, or zero.

To generate hospital-level EDAC measurements, each ED treat-and-discharge encounter is counted as 1 half-day, whereas observation stays are rounded up to the nearest half-day, and each readmission day counts as 1 day. If an ED visit results in a readmission on the same day, only the readmission is counted. Differences in case mix among hospitals are accounted for by the measure. In addition, the EDAC accounts for the number of days each patient is at risk for a hospital revisit by incorporating the number of days (up to 30) that a patient survives after discharge as part of the outcome.” 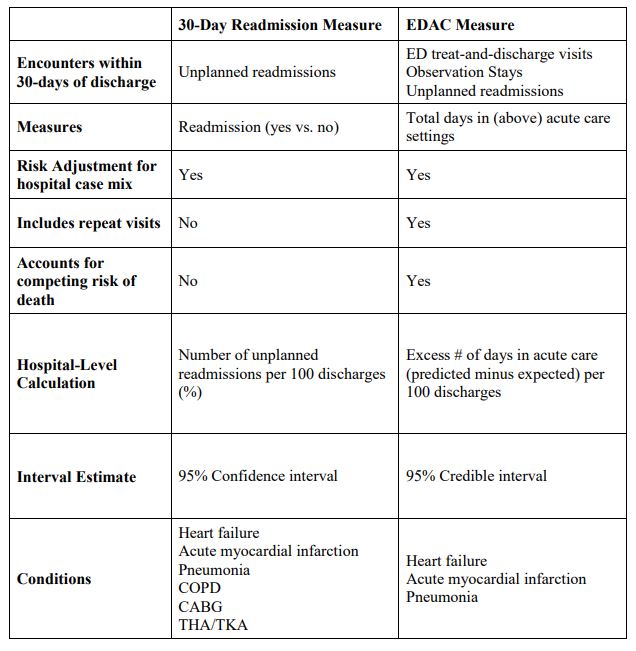 [From the article’s Discussion] “A few potential reasons exist for the difference in hospital performance assessments between the EDAC and readmission measures. First, the EDAC measure provides a more comprehensive picture of total days spent in any hospital setting, whereas the readmission measure counts only the first inpatient revisit. Under the HRRP, some hospitals have increased efforts to manage patients who return after discharge in EDs and reclassify admissions as observation stays, making their readmission rates seem lower. The EDAC measure is less susceptible to this type of gaming, allowing for fairer comparisons of hospital performance. Second, hospitals with higher postdischarge death rates may perform better under the current HRRP, because a patient who dies shortly after discharge cannot be readmitted. The EDAC measure addresses this limitation of the readmission measure by accounting for survival time after discharge. Recent evidence suggests that doing so changes the penalty status of hospitals participating in the HRRP.

[..] Although national declines in readmissions initially were attributed to improvements in care transitions, recent evidence suggests that much of these reductions may partly be a result of coding and statistical artifact, as well as increased efforts by hospitals to treat patients who return in EDs and observation stays. How such shifts in care settings have affected quality of care, patient experience and satisfaction, or out-of-pocket expenditures is unclear, and controversy exists about whether they have been appropriate. Some studies suggest that implementation of the HRRP may have been associated with increased mortality for heart failure, raising concern that intensified efforts to manage patients in non-inpatient settings may adversely affect patients at the margin who might benefit from inpatient care. The EDAC measure could mitigate these concerns and encourage more considered decision making about the care needs of patients who return after discharge.”

[From the accompanying editorial] “Wadhera and colleagues’ analysis is clearly a step in the right direction, at least as a measure of resource use. Although it incorporates the CMS’s recent risk adjustment enhancement using “dual-eligible” Medicare and Medicaid enrollment status, it suffers from the same problem as the readmissions measure in its limited ability to adjust for frailty, medical complexity, and social determinants of health—major drivers of rehospitalization. Like other measures of unplanned readmissions, it also fails to account for the few rehospitalizations that represent lapses in care. We know that readmission for heart failure or cancer is a life-saving intervention that often indicates appropriate escalation of care for a progressive disease.

Although the EDAC measure captures the use of acute care hospital resources, both it and the readmissions metric are poorly designed to measure quality of care and patient safety. The continued use of readmission measures as a reflection of quality of care in national rankings and pay-for-performance programs is empirically suspect and an ongoing source of frustration and confusion among health care leaders and researchers. We can do better.”