“The American College of Cardiology and American Heart Association (ACC/AHA) practice guidelines for perioperative cardiovascular evaluation for noncardiac surgery aim to improve the effectiveness of perioperative care, optimize patient outcomes, and improve resource use. The guidelines have consistently deemphasized preoperative cardiac testing prompted solely by the upcoming surgery in the absence of signs or symptoms that would warrant testing outside of the preoperative setting.

[..] Using MarketScan inpatient claims data from 2003 to 2017, we selected patients according to International Classification of Diseases, Ninth Revision, Clinical Modification and International Statistical Classification of Diseases, Tenth Revision, Clinical Modification (ICD-9-CM and ICD-10-CM, respectively) who underwent total knee arthroplasty and total hip arthroplasty surgeries . After the initial cohort selection (n = 1,369,098), we applied the following exclusion criteria to patients: (1) undergoing elective surgery only, based on the principal diagnosis of osteoarthrosis, (2) 18 years and older, (3) first surgery observed only, and (4) active enrollment in the insurance plan 12 months prior to surgery. This selection process yielded 801,396 elective total hip and knee replacement surgeries performed between 2004 and 2017.

The primary outcome measure was the presence of any cardiac stress test within the 60 days prior to elective lower extremity joint replacement surgery. A 60-day period was chosen owing to previous analyses of the frequency of preoperative stress testing. [..] Secondary outcomes included a diagnosis of myocardial infarction or cardiac arrest during the inpatient claim associated with the total joint arthroplasty. 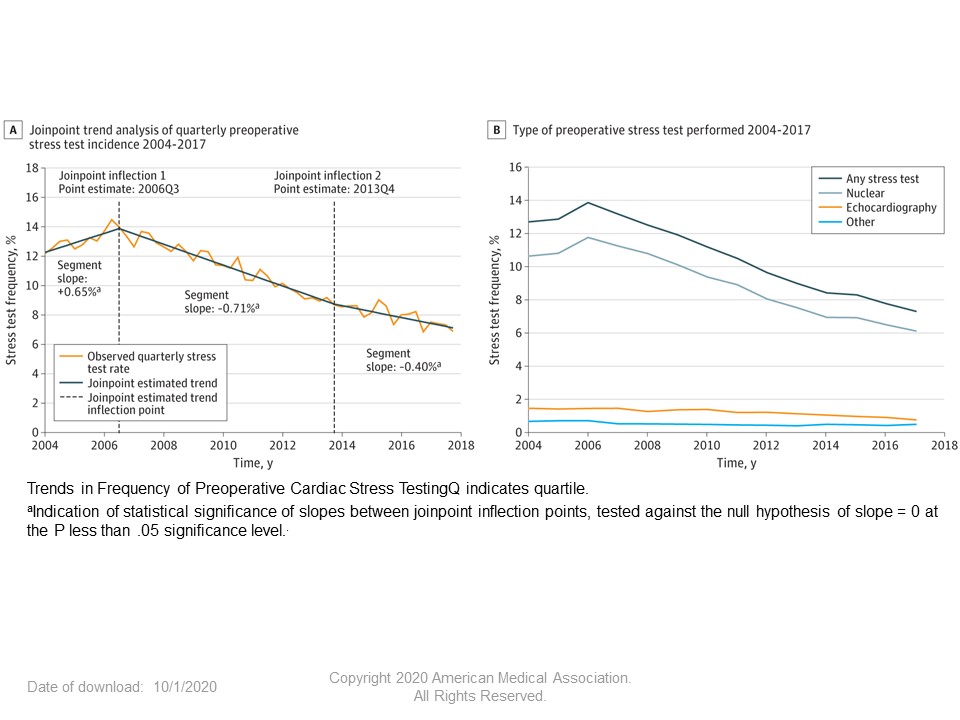 [..] Our study identified a sustained decline in the frequency of preoperative cardiac stress tests in patients who underwent a total hip or knee arthroplasty beginning in Q4 of 2006. We did not observe any difference in myocardial infarction or cardiac arrest in patients with at least 1 RCRI condition who underwent stress testing, which suggests stress testing may not contribute to risk stratification in this patient population. Further, the proportion of stress tests conducted for patients with zero RCRI conditions remains high, which suggests an opportunity for interventions to further reduce preoperative cardiac stress testing. Additional investigation is needed to evaluate the optimal patient conditions that would warrant stress testing and whether our results are generalizable to other surgical procedures.”