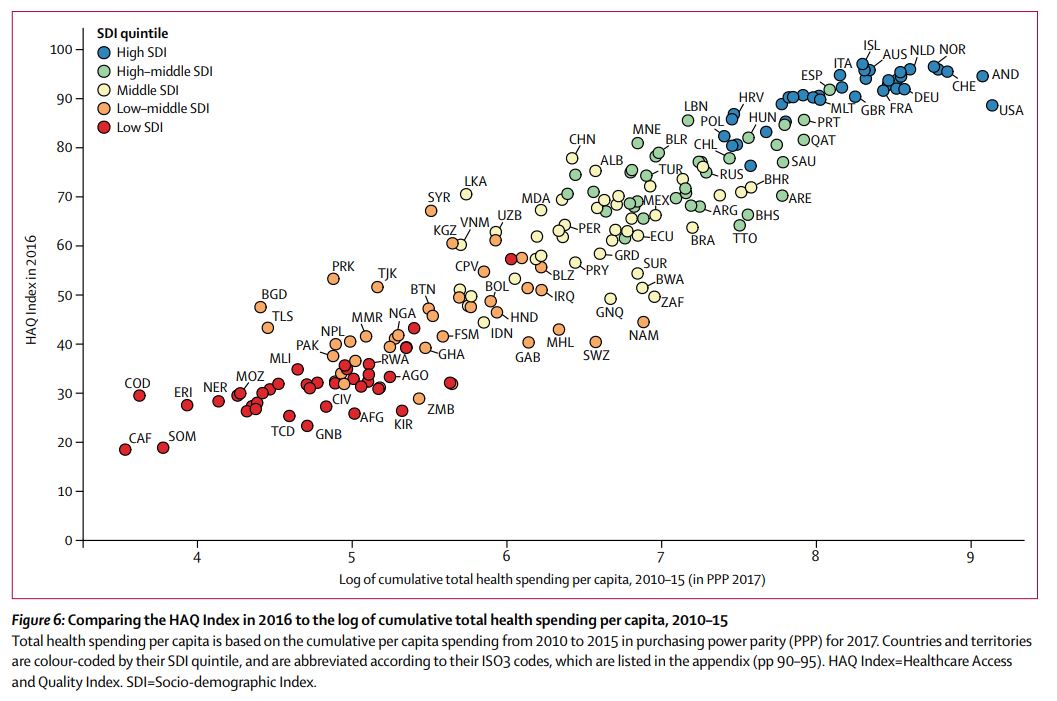 Measuring performance on the Healthcare Access and Quality Index for 195 countries and territories and selected subnational locations: a systematic analysis from the Global Burden of Disease Study 2016, Lancet 2018.5.23

“For the present study, we based the HAQ Index on the list of causes established by Nolte and McKee, and did not systematically re-examine scientific literature to update causes for which personal health care can significantly improve outcomes. Conducting this kind of systematic review is crucial to identifying additional causes for inclusion in the HAQ Index. Numerous causes should be considered, and would likely result in adding antiretroviral therapy for HIV, artemisinin-based combination therapies for malaria, treatment of hepatitis C, and improvements in emergency and trauma care, among others. Expanding the amenable cause list should be determined by clear criteria that define when health care sufficiently reduces cause-specific mortality and thus provides a strong enough signal about access and quality. Such additions will probably improve the HAQ Index, though the nature of PCA estimation and its measurement of common variance across 32 causes may not substantially change future results. This analysis stemmed from existing scientific literature on mortality amenable to health care, but personal health care also can have profound effects on non-fatal health outcomes (eg, hip replacement for oesteoarthritis or surgery for cataracts). Future updates of the HAQ Index should consider incorporating measures of non-fatal conditions amenable to personal health care, which would then capture health-system capacity to deliver health gains through improved functional health status.

Understanding how much mortality or disease burden is avertable based on providing access to high-quality personal health care and modifying behavioural and environmental risks through public health initiatives is of high policy interest. GBD currently assesses mortality and burden attributable to a large set of risk factors, which supplies useful insights on the potential of risk modification to improve health. Quantification of the full potential of personal health care to reduce burden by cause would provide an important additional piece of policy-relevant information. Controlling for other factors through statistical modelling, such as income and educational attainment, we could examine how much cause-specific variation relates to the HAQ Index. Such work would help to pinpoint opportunities for national and subnational progress through health-system improvements, which would likely include public health programmes and policies as well as the organisation and delivery of personal health services across levels of care.”

Healthcare Access and Quality Index based on mortality from causes amenable to personal health care in 195 countries and territories, 1990–2015: a novel analysis from the Global Burden of Disease Study 2015, Lancet 2017.5.18 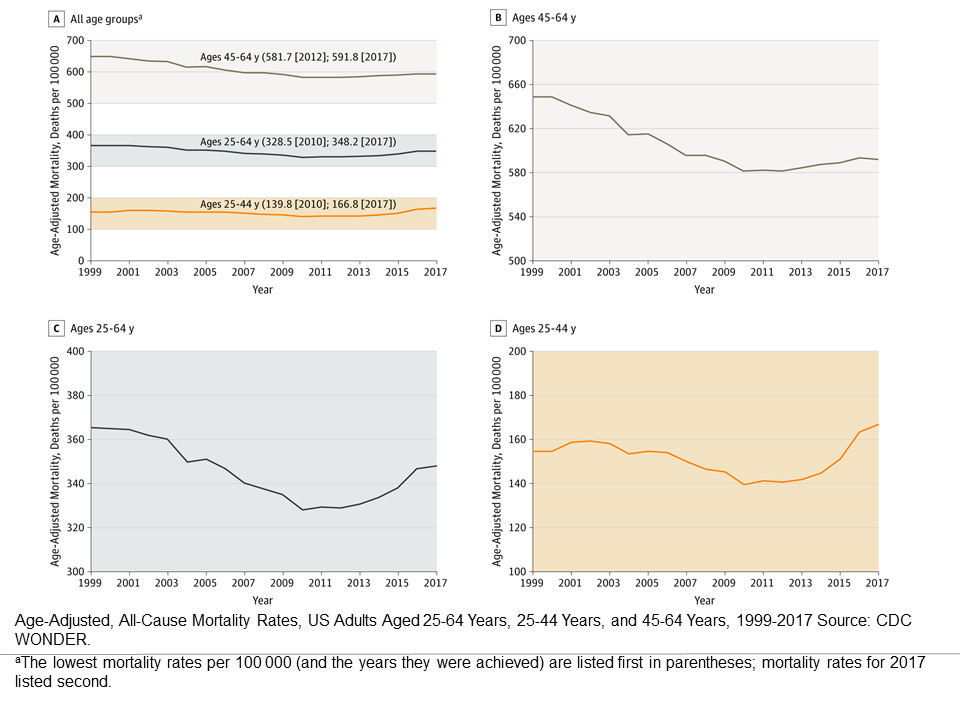 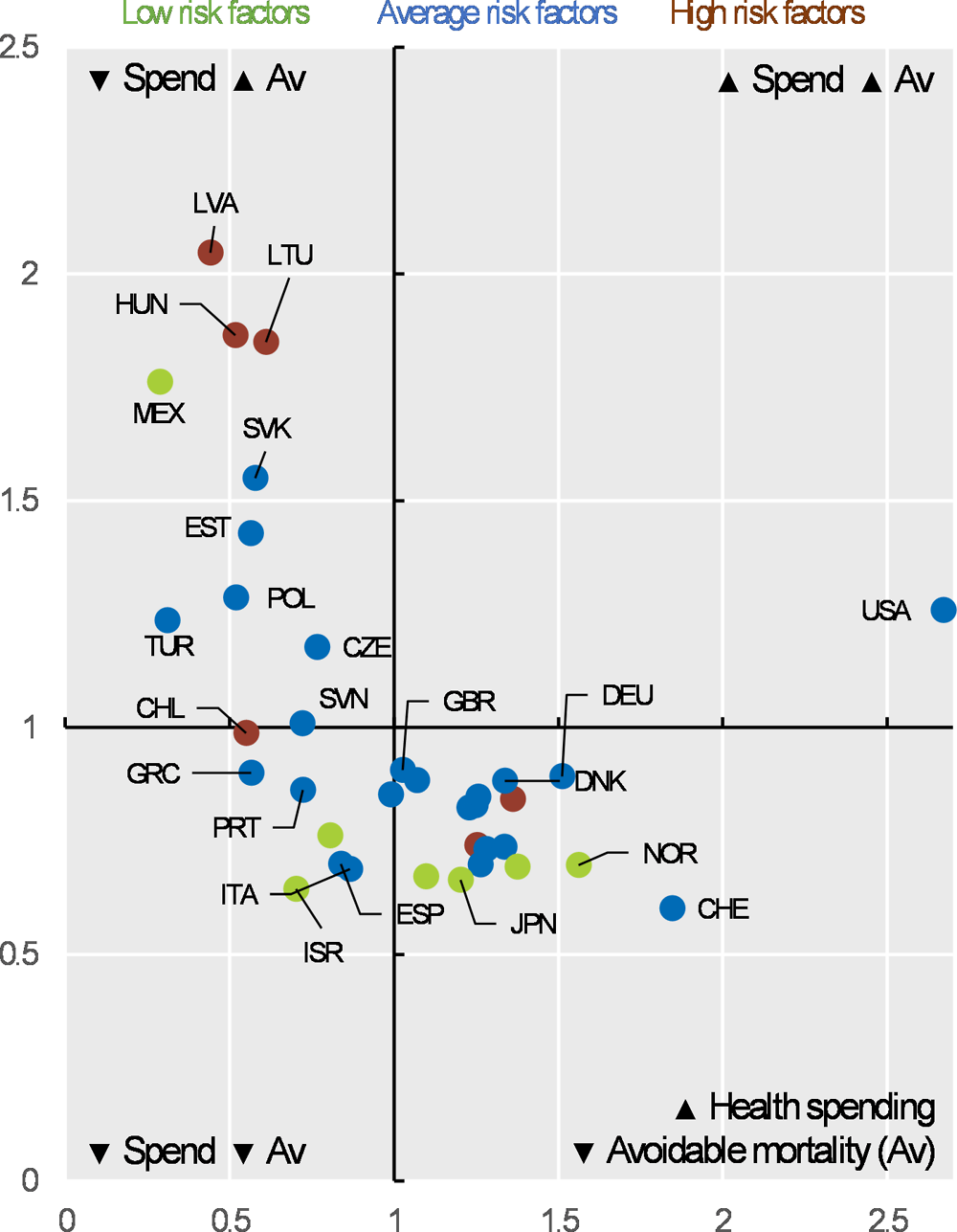 Health at a Glance 2019: OECD Indicators

“Description of System: Mortality data for U.S. residents from the National Vital Statistics System were used to calculate potentially excess deaths from the five leading causes of death among persons aged <80 years. CDC’s NCHS urban-rural classification scheme for counties was used to categorize the deaths according to the urban-rural county classification level of the decedent’s county of residence (1: large central metropolitan [most urban], 2: large fringe metropolitan, 3: medium metropolitan, 4: small metropolitan, 5: micropolitan, and 6: noncore [most rural]). Potentially excess deaths were defined as deaths among persons aged <80 years that exceeded the number expected if the death rates for each cause in all states were equivalent to those in the benchmark states (i.e., the three states with the lowest rates). Potentially excess deaths were calculated separately for the six urban-rural county categories nationally, the 10 U.S. Department of Health and Human Services public health regions, and the 50 states and District of Columbia.

Percentage of deaths that were potentially excess among persons aged <80 years from the five leading causes of death — National Vital Statistics System, United States, 2010–2017 [Potentially excess deaths are defined as deaths among persons aged <80 years in excess of the number that would be expected if the death rates for each cause in all states were equivalent to those in the benchmark states (i.e., the three states with the lowest rates).] 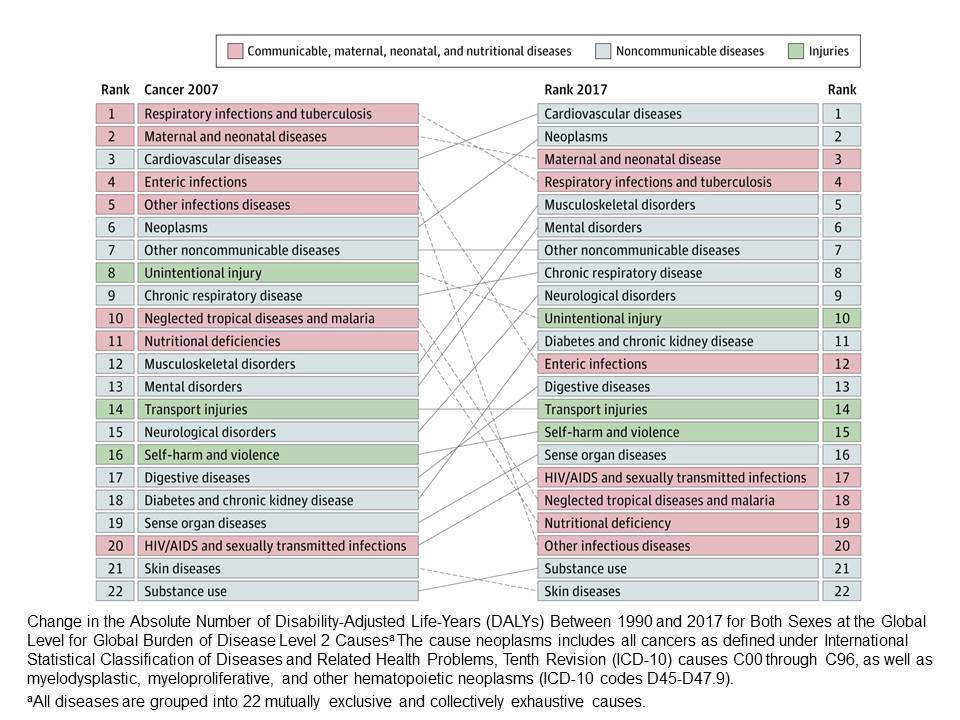 [..] Our analysis shows how cancer has increased in importance as a global health problem. Although it ranked sixth in 1990 among the top causes for DALYs worldwide, it has risen to the second place in 2017 behind cardiovascular diseases. Cancer now occupies the second place in the ranking of global deaths, YLLs, and DALYs, and is among the top 2 leading causes of deaths, YLLs, and DALYs in the highest 3 SDI quintiles. This shift in disease burden owing to the demographic and epidemiological transitions has important implications on health policy: ensuring access to universal health coverage and protection against catastrophic health expenditure directly related to the cancer treatment, but also against the long-term costs associated with a cancer diagnosis for a household, has to be prioritized. Fifty percent of cancer cases occur in high SDI countries, but only 30% of cancer deaths, 25% of cancer DALYs, and 23% of cancer YLLs. To ensure sustainable global development, increased efforts are needed to reduce these health inequalities. Recognizing the strong interdependencies between socioeconomic status and health and the large contribution of cancer to the overall disease burden is a first step in making investments in cancer prevention and treatment a priority. Cervical cancer is likely the best example of inequalities in cancer with vast differences in burden by SDI. As a completely preventable cancer where cost-effective vaccination and screening approaches are available, cervical cancer has recently gained global attention through the World Health Organization’s call for elimination. Falling incidence rates in all SDI quintiles are encouraging, but countries with the least resources are still facing the largest burden because of lack of screening programs. Immunization against human papillomavirus, screening, and treatment of cervical cancer is therefore of utmost importance in all socioeconomic settings.” 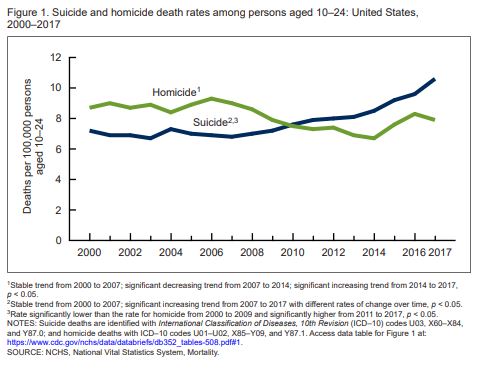