“Our intervention consisted of 3 main parts. First was geriatric assessment consisting of a medical history, systematic screening for current problems, clinical examination of the patient, and relevant supplementary tests as well as a detailed review of each medication in use, with emphasis on indication, dosage, possible adverse effects, and interactions. Assessments were done by a physician trained in geriatric medicine, supervised by a senior consultant. On average, 1 hour was spent on each clinical consultation. Second was a meeting between the geriatrician and the FP [family physician], with discussion of each medication, establishing a collaborative plan for adjustments and follow-up. Approximately 15 minutes were spent discussing each patient. Third was clinical follow-up by the geriatrician or FP, as agreed on. Follow-up was in general done by the FP.

[..] The primary outcome was HRQoL [health-related quality of life], measured by the 15D instrument at 16 weeks. The 15D instrument is a generic, 15-dimensional measure assessing mobility, vision, hearing, breathing, sleeping, eating, speech, elimination, usual activities, mental function, discomfort/symptoms, depression, distress, vitality, and sexual activity. Each dimension is rated by the respondent on an ordinal scale with 5 levels. Single index scores are calculated by population-based utility weights and range from 0 to 1, with higher scores indicating better HRQoL. A change of ±0.015 or more is considered clinically important, and a change of more than 0.035 in the positive direction represents “much better HRQoL.”

[..] There were no statistically significant effects regarding orthostatic blood pressure, falls, weight, relative stress, activities of daily living functioning, or use of formal care resources. For these outcomes, other aspects of the patient’s health and social situation might be of greater importance.” 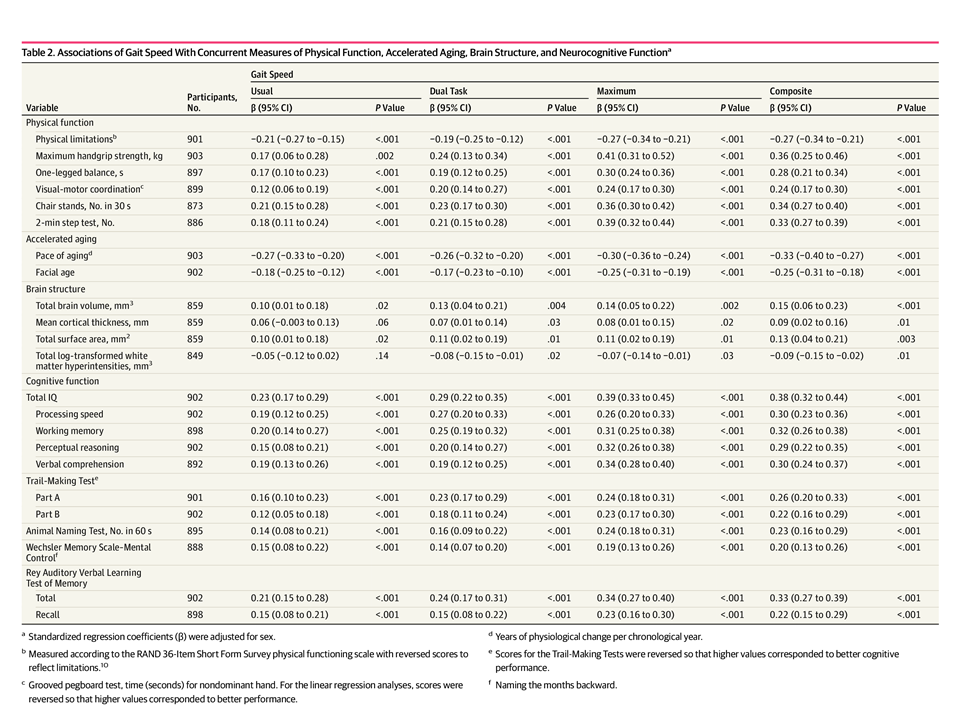 [..] In this 5-decade longitudinal study of a population-representative birth cohort, gait speed measured at age 45 years was already associated with physical and biological indicators of accelerated aging. Beyond accelerated aging, gait speed was associated with lifelong compromised brain health and neurocognitive functioning beginning as early as age 3 years. Notably, gait speed under the 3 separate walk conditions shared the same associations, albeit with larger effect sizes for the 2 challenge walks, especially maximum gait speed, which could suggest that maximum gait speed may be a more sensitive measure among midlife patients. These findings call for rethinking gait speed, from a geriatric index of functional decline to an index of the role of lifelong neurocognitive functioning in processes of aging. We next highlight 3 specific findings.

First, slow gait was associated with poor physical function at midlife. In this midlife cohort—most of whom walked faster than older adults—we documented associations between gait speed and physical performance similar to those observed in older adults, indicating that the association between gait speed and physical function is evident at age 45 years, not just among older people.

Third, slow gait at midlife was associated with poorer neurocognitive functioning across multiple cognitive domains; there was a mean difference of 16 IQ points (>1 SD) between the slowest and fastest walkers (ie, bottom vs top quintile). These findings align with those of several studies of older adults showing associations of slow gait with cognitive impairment and risk of dementia. Remarkably, in our study, gait speed was associated not only with concurrent neurocognitive functioning in adulthood but also with neurocognitive functioning in early childhood. The effect sizes between participants in the slowest and fastest gait speed quintiles were far from trivial: at age 3 years, the difference in brain health was 0.62 SD [..]

Because gait speed shows meaningful aging-related variation already in midlife, it may prove to be a useful measure in aging trials aimed at preventing the onset of age-related disease. A variety of interventions targeting human aging—ranging from calorie restriction to metformin administration—are being tested in aging-prevention trials. It is increasingly recognized that it might be easier to prevent aging-associated damage than to reverse it, suggesting that the effect of interventions to slow aging may work better if they are applied while people are still young and free of disease and disability. This necessitates a shift toward enrolling younger participants in antiaging trials, and with this shift, valid measures are required to identify risk groups that need intervention, and to track the course of outcome before the manifestation of age-related diseases. Gait speed could be used as one such measure: the gait speed test is cheap, safe, easy to test repeatedly, and feasible to use among people in their 40s.”